Nothing We Say EP 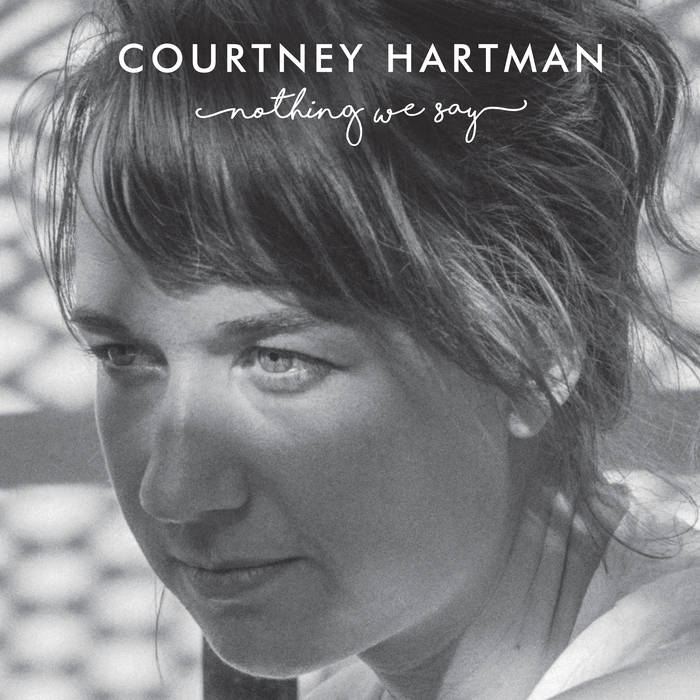 At the first listening I wanted to hear more. I'm glad I did. Thanks for the peacefull songs. Favorite track: Nothing We Say.

April D Struthers Courtney's skills and personality shine through on this EP! Good stuff! Favorite track: Nothing We Say.

Phil Mann Although I live in the UK I've seen you play with Della Mae at Merlefest NC, Charleston SC and Manchester, England. Impressed by your flat picking guitar style with DM and now this solo project. Looking forward to receiving the rest of the album. Phil Mann Favorite track: When You See the Morning.

All tracks by Courtney Hartman, Fearless Hum Publishing (BMI)
except "When You See the Morning" written with Taylor Ashton (ISOCAN) & Cumberland Gap (traditional)


With just six songs, it’s astonishing how Courtney Hartman’s debut solo recording tells such a vivid story. Nothing We Say is flush with intimate ruminations on her life as a traveling musician and a deep curiosity about the world around her.

“This album is a collection of songs that I wrote and labored over in hotel rooms, late at night, early in the morning, on the road, or at home during a few days of rest and laundry,” says the revered roots musician. “They are outpourings of the last couple years that I spent touring the world with Della Mae. Observations of the people and places that have infiltrated my mind.”

The luminous EP, released on Sept 30, delivers on the promise always apparent in her work as a guitarist and songwriter for Della Mae, the Grammy-nominated string band.

A sense of home threads through these songs, as a tribute to Hartman’s Colorado heritage and how it continues to inspire her wherever she goes. Although she’s based in Brooklyn, her home state still looms large, as evident on the closing “Take Me Back Colorado”:

In the dead of a Colorado winter – under clear, cold skies and, at night, an unending panorama of shimmering stars – Hartman recorded the album with co-producer Jacob Blumberg in a small cabin on a ranch in Del Norte. Bassist Mark Schatz and drummer Michael John McKee fleshed out the songs with graceful precision, giving them room to grow and explore, and Taylor Ashton added close harmonies on “When You See the Morning.”

Hartman casts a gimlet eye not only on her own life, but also that of others. Take “Noah,” a hymn-like lullaby that relays the heartbreaking story of a mother who lost custody of her young child. Meanwhile, the title track aches with the hard truth that sometimes connection is simply fleeting. “I can love you today, but don’t ask for tomorrow,” she warns on “Nothing We Say.” “Don't ask if tomorrow I can stay/ With the sun arising/ I've got to be travelin’/ But we can make a night of it again someday.”

Adding to her five original songs, Hartman puts a freewheeling spin on the folk standard “Cumberland Gap,” reimagining it with fresh and downright wild variations. An instrumental, it’s also a prime showcase for the flatpicking guitar prowess that has earned Hartman acclaim from the magazines Acoustic Guitar and Fretboard Journal and peers such as jazz virtuoso Julian Lage.

Holed up in that secluded cabin, where the temperature outside rarely climbed above the teens, Hartman and her crew conjured warmth and communion. We hear the shape of the room on these unvarnished recordings, as if you’re seated beside them. We hear the quietude of the landscape, the crackle of the wood-burning stove as Hartman fingerpicks the melody on “Take Me Back Colorado.” She wasn’t afraid to leave in the imperfections, knowing that they reflected the honesty at the heart of her lyrics. She was more interested in capturing what she calls “an urgency of solitude.”

“I’ll put an extroverted album out into the world one day. But this one isn’t quite that,” Hartman says. “I wanted the songs to sound whole with just my voice and guitar, and then slowly add what was wanted. What I didn’t want was for a listener to hear it and ask, Yes, but where is Courtney?”

There’s no mistaking where and what Hartman is on Nothing We Say: She’s open-hearted and in the spotlight. Right where she belongs.

Bandcamp Daily  your guide to the world of Bandcamp